Watch as Aaron creates a dramatic African scene. It’s up to you to fill in the story…

*** Subscribe to My Channel for More Art & Animation Videos: ***
http://www.youtube.com/subscription_center?add_user=AaronBlaiseArt

*** Find More Art Lessons and Tutorials at my Website: ***
https://CreatureArtTeacher.com/?src=yt

A Basic Intro to Illustration in Photoshop:
http://goo.gl/1PhzRN

For 21 years Aaron worked with Disney helping to create some of the greatest animated films ever made. During that time he worked as an animator or supervising animator on “The Rescuers Down Under”, “Beauty and the Beast”, “Aladdin”, “The Lion King”, “Pocahontas”, “Mulan” and more.

In 2003 he was co-director of “Brother Bear” for which he earned an Oscar nomination for Best Animated Feature Film.

After “Brother Bear” he helped to develop several projects but ultimately left Disney to pursue an opportunity back home in Florida. Aaron recently served as 2D Animation Supervisor and Character Designer for the “The Bear and the Hare” an advertisement loved by millions around the world. (https://www.youtube.com/watch?v=XqWig2WARb0)

Aaron currently is working on his mission to bring affordable art education and animation training to the world through his website: https://CreatureArtTeacher.com/?src=yt

The 4 main types of subsurface scattering

HOW TO COLOR YOUR DRAWINGS (in any software) ?‍?

Come Draw With Me – Lettering & Composition in Procreate

How to paint fur – Tutorial

IPad Pro and the Surface Pro review with Peter Han

COLORING & LINEART (and how you can improve them) 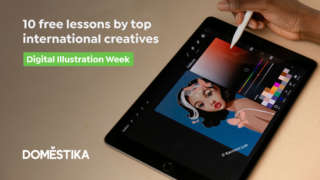 Domestika is the fastest-growing creative community where the best creative experts share their knowledge and skills through professionally produced online courses. It all started as an online forum and a small but dynamic showcase of creative professionals, designed to help them connect and learn from each other.

Today, the online community is home to over 6 million people from around the world who are curious and passionate about learning new creative skills.

(Affiliate links: clicking on this ad you will be redirected to the Domestika website)

Anatomy of the Human Body